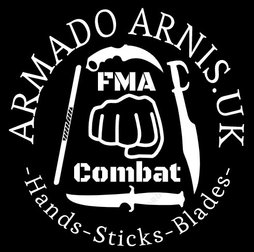 We teach a dynamic, effective and realistic combat system that is tailored to the UK, using traditional Arnis principles and techniques.

Wayne Hunt is the Chief Instructor and Head of Armado Arnis UK.

Wayne's official Filipino Instructor Title within the Armado FMA DefTac system is Punong Guro and he is a 3rd Degree Black Belt actively working towards his 4th.

Guro Wayne has been training in Martial Arts for over 40 years in multiple disciplines. He attained his first Black Belt in Tang Soo Do at the age of 23 and was Essex Tang Soo Do Free Fighting Champion 3 years running in 1980, 1981 & 1982.

Wing Chun Kung Fu was his next calling and he spent 5 years training under Sifu Eddie Yeoh in Chinatown, taking part in various Inter Club challenges and mastering all the forms that meant he was qualified to teach the system and attained a Black Belt Status.

After an extended hiatus from the arts, Guro Wayne moved on to Freestyle Kickboxing and after that Muay Thai, once again studying long enough in each to achieve an Instructor rank and Black Belts in both.

Guro Wayne found the Filipino Martial Arts when he started studying Rapid Arnis with Grand Master Pat O’Malley and did this for 2 years. Whilst he did not train long enough to attain a black belt in this system, he was awarded an Affiliate Instructor status.

Flying Eagle Hapkido was where he received his fifth Black Belt and after he had accomplished his goals in this Martial Art (studying to Black Belt 1st Dan) he moved back into the Wing Chun world, studying the Leung Ting system within the EWTO for 5 years.

In December 2016 Guro Wayne flew to the Philippines and stayed with Maestro for 2 months training 10 hours a day learning the Armado system. Due to his knowledge gained from Rapid Arnis and Lacoste-Inosanto Kali, he was able to pick up the system concepts, principles and nuances quickly and by the end of the intensive training he was presented with his Assistant Instructor Black Belt grade and the authority to represent Armado FMA Defensive Tactics International in the United Kingdom.

Guro Wayne started Armado seminars when he returned and started a regular class that Leon and Dave joined pretty much straight away. As well as training students Wayne typically trains himself for 2 hours every day and Maestro continues to provide training remotely.

In 2018, Wayne returned to the Philippines for another intensive training month to refine his skills, absorb any updates to the system and upgrade to Black Belt 2nd Degree.

During 2020 Guro Wayne and the team have been developing the teaching strategy of the Armado system to cater specifically to self defence needs relating to the UK, focused on Empty Hand Combatives and knife defence. We have rebranded the club name to Armado Arnis UK to reflect that but remain a committed part of the Armado FMA DefTac family.

There are two senior students currently working towards their Black Belt that assist Guro Wayne in classes, at seminars and demonstrations as needed.

Leon and Dave have been studying with Wayne for 4 years since he brought Armado Arnis to the UK and will grade for their Black Belt in December 2020. 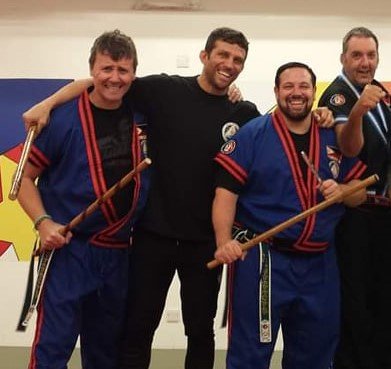 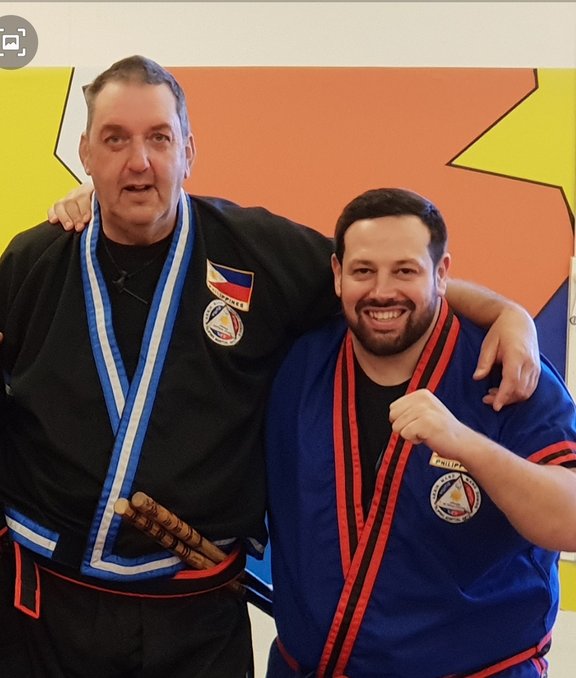 Leon has been training in Martial Arts since he was a boy starting with Judo and then Greco Roman Wrestling. In the latter teenage years, he trained to brown belt in Freestyle Kickboxing.

After a long break he restarted his martial arts journey in his late twenties learning Leung Ting Wing Chun Kung Fu via the UK Auto Defence system. At 30 he spent 2 months in Thailand learning Muay Thai in Koh Phangan and taught this in the UK to a closed group in South East London for a time.

Leon’s focus moved towards street based self-protection and he would go to seminars in different disciplines to learn new techniques and principles and broaden his knowledge. He certified with the now defunct RSDA (Realistic Self Defence Association) as a Self Defence Instructor.

He currently has an active Self Defence Instructor certification in Modern Close Quarter Combatives, but his focus and passion is Armado Arnis having trained consistently with Guro Wayne and the team for 4 years. 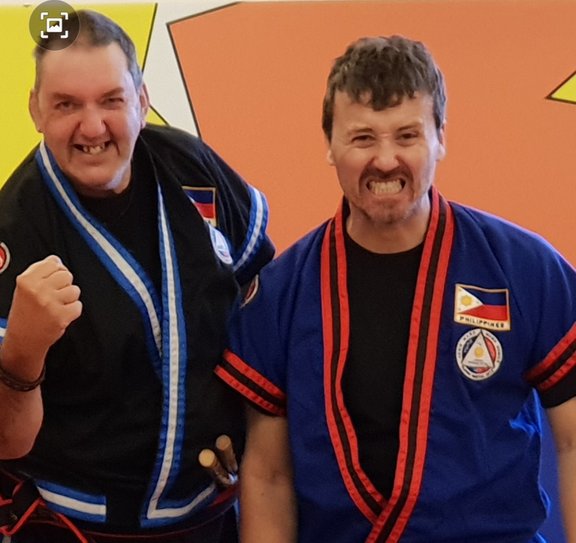 He met Guro Wayne when they were learning Lacoste-Inosanto Kali together. When Wayne returned from the Philippines and started teaching Armado Arnis, Dave stopped Kali so as to focus solely on the Armado system and has been a dedicated practitioner ever since.